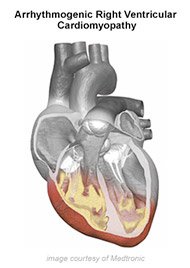 With AC, there is a problem with the connections between heart cells, and damaged heart cells are replaced with scar tissue and fat. The resulting scar tissue can lead to abnormal electrical activity (arrhythmias) and problems with heart contraction. In the early stages of the disease, the right side of the heart may appear to be thickened in certain patches but later becomes dilated with a thinner wall. Eventually, the muscles on the left side of the heart are reduced and thin layers of fat and fibrous tissue appear. An abnormal heartbeat and weaker heart function can result from these structural changes. Those with AC are at a higher risk for life-threatening arrhythmias (ventricular fibrillation) and sudden cardiac arrest.

The exact cause of AC is not always known, but it is believed to be an inherited disease. In 30 to 50 percent of cases, the disease runs in the family. In rare cases, AC can occur secondary to Naxos syndrome and Carvajal syndrome, which are rare disorders that affect the skin, hair and nails.