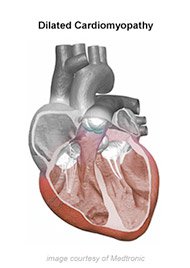 DCM occurs when the muscles in one of more of the heart chambers become enlarged or stretched (dilated). The other chambers of the heart need to work harder to compensate for the affected chambers, and may also become dilated and enlarged. As the condition progresses, the heart becomes weaker, and it becomes more difficult to pump blood through the body. This can lead to congestive heart failure causing a build-up of fluid in the lungs, liver, abdomen, and lower legs.

In the majority of cases, the exact cause of DCM cannot be determined (idiopathic cardiomyopathy). DCM can be familial and inherited; an estimated 20 to 30 percent of people with DCM have a parent or sibling with the disease. Children may also develop DCM in association with genetic disorders of a metabolic, neuromuscular, endocrine, or hematologic basis.

DCM in children can be acquired by a viral infection (myocarditis) that causes inflammation of the heart muscle and permanently damages the heart muscle cells. Exposure to cancer treatment drugs (anthracycline cardiotoxicity) is another acquired cause of DCM in children. Children with congenital heart disease may also develop DCM from multiple attempts to repair the heart.